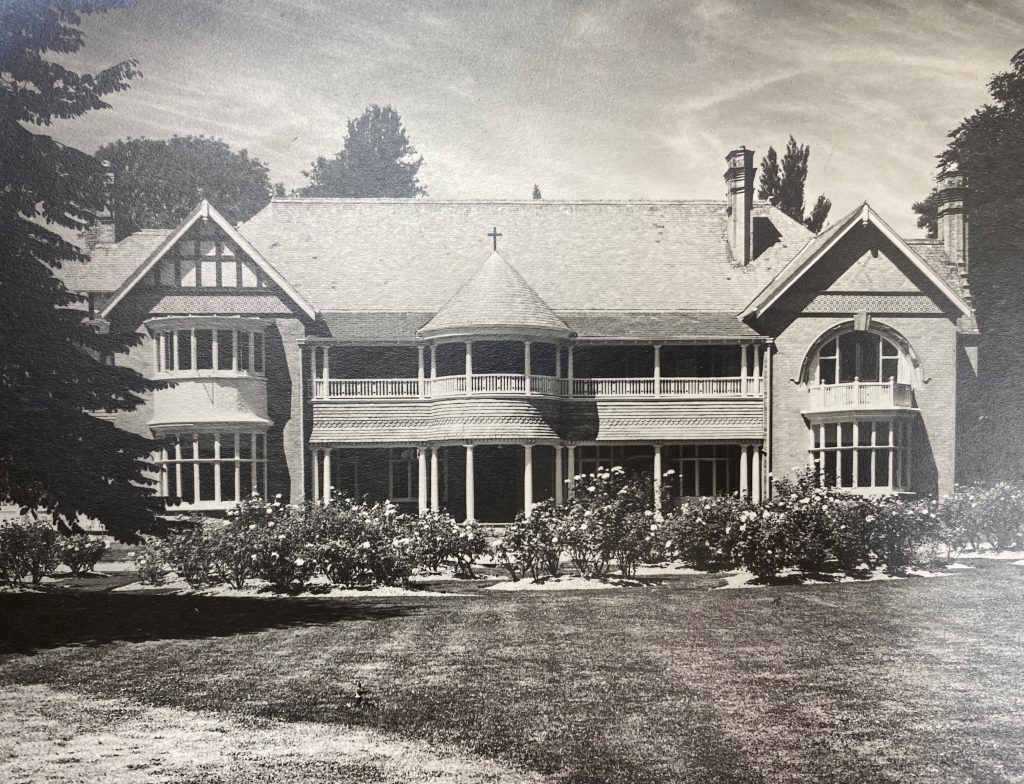 Optimism abounded when, in 1947, a crowd of 5000, including 100 dignitaries religious and secular (Apostolic Delegate Archbishop John Panico and Prime Minister Peter Fraser among them), attended the opening of Holy Name Seminary in Christchurch. Just 30 years later, the optimism was over. The establishment on Riccarton Road was closed.

Grocery magnate, city councillor and “stalwart Anglican” Thomas Kincaid built a large and stately home for his family on Riccarton Road. The architectural showpiece was completed in 1909. It faced demolition in 2021, following two disastrous fires. Its function as a seminary was to educate boys and young men aspiring to be priests in the Catholic Church.

The New Zealand Catholic Hierarchy, consisting of four Bishops (Auckland, Wellington, Christchurch,  Dunedin), agreed a new “secular” (not attached to any religious order, such as Marist) seminary was needed. Meeting in 1944, they discussed what sort of institution would be best. They decided to establish a national “Minor Seminary”. This would cater initially for students aged from 13 to 18 years, from all over New Zealand. It would provide a full secondary school education, aiming at high pass rates in the national School Certificate and Matriculation (University Entrance) examinations. A regimen to test the students’ calling to the priesthood would be part of seminary life. Active involvement in sports and hobbies would be encouraged.

Bishop Lyons, of Christchurch, labelled the Minor Seminary a “pioneer project”. It would be the only such institution in New Zealand, though Minor Seminaries were “quite common elsewhere”, including four in Australia.

According to the bishops’ plan, students who completed their studies at the Minor Seminary to a satisfactory level, and who maintained a wish to be priests, would proceed to the national “Major Seminary”, Holy Cross. There they would complete preparation for ordination with the ecclesiastical and philosophical courses that Holy Cross had been providing for adult students since 1900.

Minutes of the bishops’ 1944 meeting, regarding the mooted Minor Seminary, state: “The Hierarchy resolved to consider matters of location, buildings, finance, teaching staff and domestic arrangements”.

Wellington was an option for the location. However, Bishop Lyons was aware of the grand Riccarton property’s availability. He acted quickly, proposing its selection for the purpose. Archival files show no indication of argument on that choice. The Catholic Bishops bought the Riccarton property in 1946. The seminary opened in 1947 with 40 secondary school-aged boys on the roll. 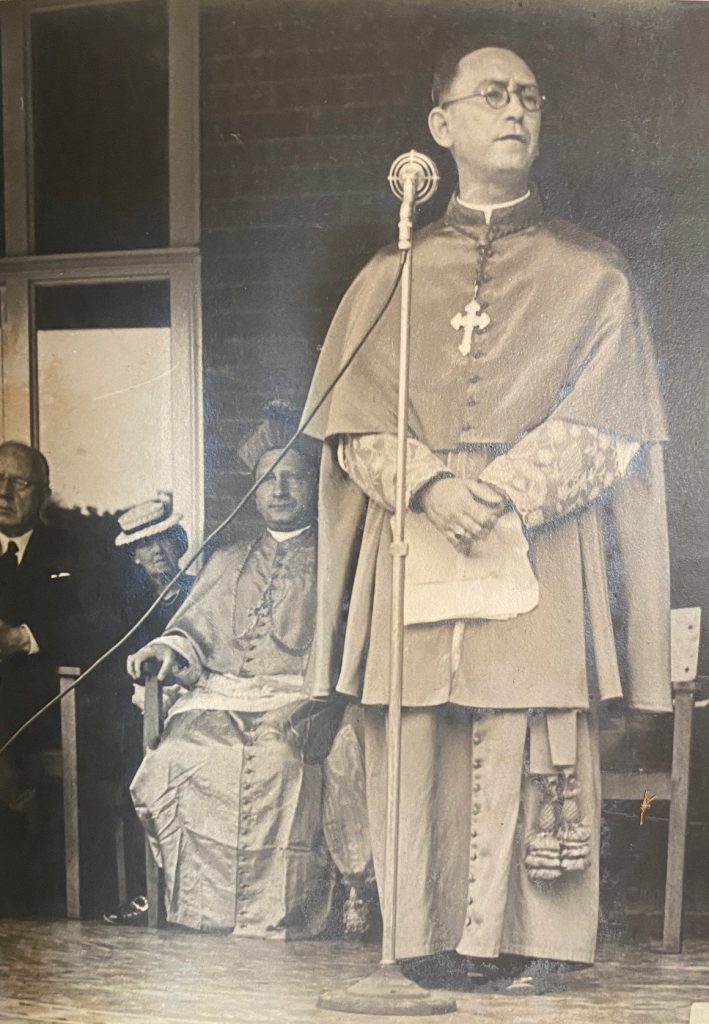 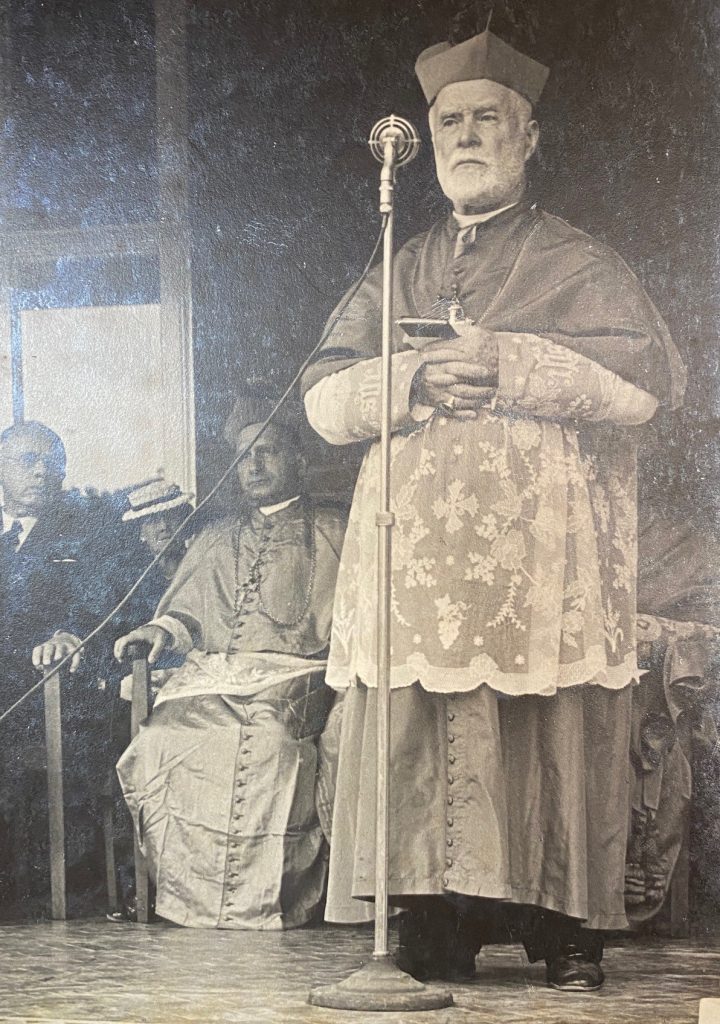 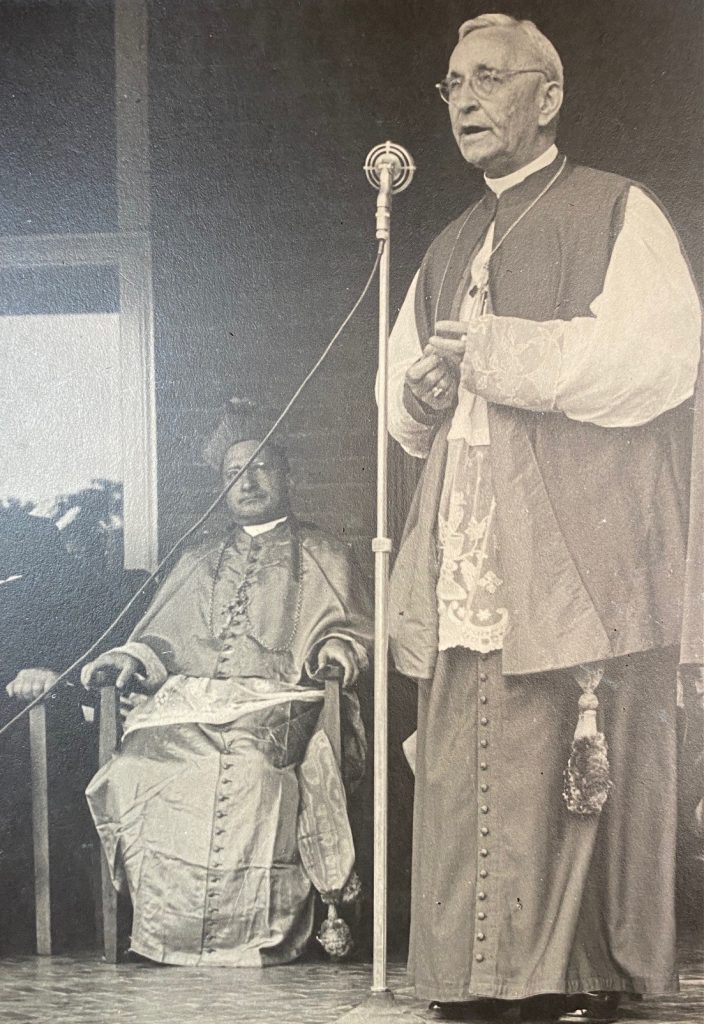 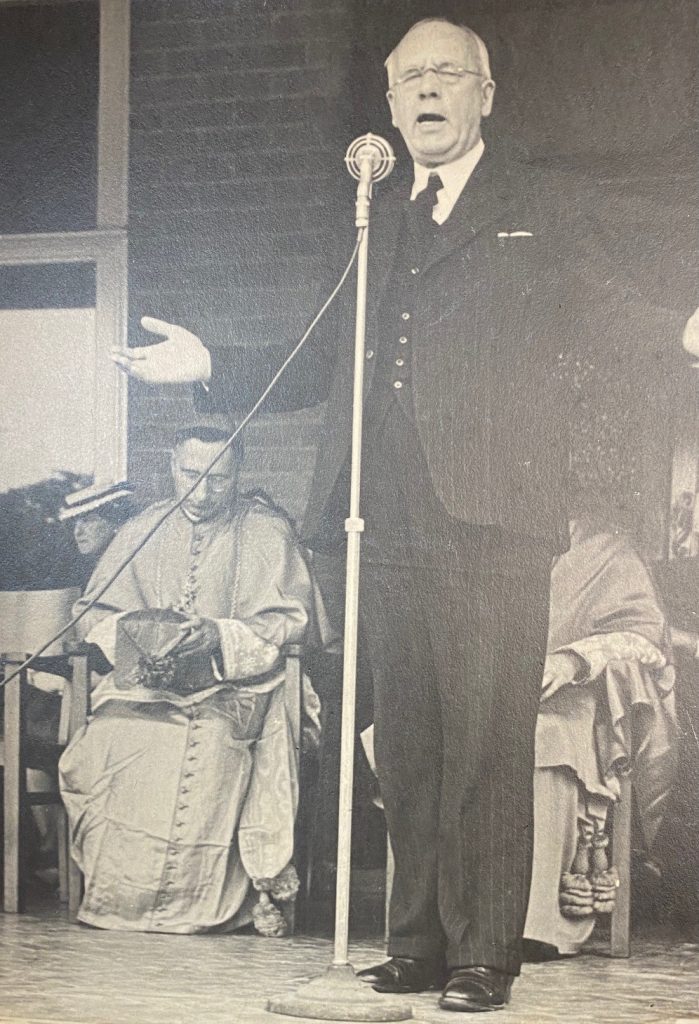 It was truly a national establishment. In its early years, 1947 to 1954, 40% of students came from the Auckland Diocese, 28% from Christchurch Diocese, 22% from Wellington Diocese, and 10% from Dunedin Diocese. Given that each diocese covered a large area, these figures are not too far from reflecting respective Catholic populations.

The new seminary was dedicated to the “Holy Names of Jesus and Mary”. An agreement was signed with the Society of Jesus (Jesuits) to provide management and teaching staff. Three Jesuit priests came from Australia, with more to follow. Another agreement was signed with the Sisters of St Joseph of Cluny to provide domestic staff. The arrival of five Nuns from Ireland was delayed until 1948 because of travel difficulties. Priests and students meanwhile did the cooking and housework – which might have tested priestly vocations further.

Converting the mansion into a secondary school/seminary, with full boarding for all students, required considerable alteration. Much of this was done in 1946. Fortunately, the changes did not alter the frontal appearance of the building which had attracted the admiring gaze of thousands.

Kincaid’s two-storeyed mansion was known as Kilmead. Christchurch architects Clarkson and Ballantyne designed it in the English Domestic style with North American influences. Landscape architect A W Brixton laid out gardens and grounds on the 1.4 hectares property.   After Kincaid’s death, in 1928, Kilmead was bought by seeds merchant John Montgomery. The latter died in 1946.

New buildings, alterations and additions to existing buildings, and changes to the grounds continued through the late 1950s and early 1960s as numbers of students continued to increase. Each student had his own room, so numbers of bedrooms grew to more than 100. Prefabricated buildings and military surplus huts were brought in to increase classroom and lecture hall spaces. A library, a large kitchen, a chapel with seating for 300, a dining room, reception rooms and a manager’s suite were added, bringing the total of rooms to 279.

Enthusiasm for sports and gardening meant more garden spaces, playing fields and courts were needed. Some neighbouring property was purchased for expansion.   A student of the 1950s, writer David McGill, reminisced on: “superb sports facilities: footy fields, tennis courts, a full-sized billiards table, cricket pitches, running track”. He expressed nostalgia for: “three square meals a day cooked by the nuns, the scholastic brio, the great library, the mateship of minds dedicated to the single purpose of serving God, the sublime plain chant after Mass”.

A major change at the seminary came in the mid-1950s when the secondary school courses were phased out. Bishop Joyce of Christchurch explained the reason for this.  “Leakage from the Minor Seminary has been very great. We have also found a reluctance on the part of boys….. to enter the Minor Seminary. They prefer to go with their cobbers to the recognised Catholic Secondary Colleges,” he said.

A full ecclesiastical and philosophical course was phased in to replace the secondary school course. A formal agreement was reached between the Jesuit Priests of Holy Name and the Vincentian Priests of Holy Cross, and with the New Zealand Catholic Hierarchy, to amalgamate the two seminaries. Riccarton would deliver courses for school-leavers (and some slightly older students) who would proceed to Mosgiel for their final years of preparation for ordination. From 1959 Holy Name bore the titles “House of Philosophy” and “Major Seminary”.

In 1956 the first students who had begun at Holy Name as mere boys were ordained as priests. About a third of early students persevered with their studies at Riccarton and Mosgiel and became priests. Students’ reports held in the Archives show respectful comments by the lecturers for students choosing to leave the seminary. A few comments refer bluntly to lack of will or wit.

Fund-raising through the parishes helped with fees and costs for some students. All had to live-in at the seminary. Those from family homes in Christchurch were denied the standard government boarding allowance for secondary students. This matter was taken up with the Government of the day and an exception was made.  Other costs included purchase of soutanes and reverse collars, such as priests wore. This was compulsory garb for all the boys. The rule was eventually eased. The students had the same holidays as State schools and some found temporary jobs and earned money to help meet their costs.

Hopes were high when Holy Name Seminary was launched in 1947. However, by 1970 numbers of students were declining. The possibility of closure was being debated. From early 1976, Church working parties discussed the possible amalgamation of Holy Name and Holy Cross colleges.

Former student Monsignor James Harrington, in an article about Holy Name Seminary, describes its  closure as “inevitable”. He attributed this to falling numbers of students. Only 12 students were then enrolled at the Riccarton site, with a further 21 at Mosgiel. Economic studies showed only small cost savings would be made from amalgamation, unless the Riccarton Road site were leased at a high rate. Educational studies showed worthwhile benefits for student learning would accrue.

In notes from a 1977 meeting, working party member Monsignor Thomas Liddy wrote: “The composition of the meeting was weighed overwhelmingly in favour of Mosgiel”. The final decision was to close Holy Name in 1978 and transfer its students to Holy Cross. The Mosgiel establishment would then return to its former status of a secular (not part of any religious order, such as Marists) seminary offering adult students full preparation for ordination. Holy Cross would later close too.

The Riccarton property remained in the ownership of the New Zealand Bishops. They converted the former seminary to a boarding hostel for university students, as the University of Canterbury had recently moved to nearby Ilam. They named the hostel Campion Hall.

The bishops decided in 1981 the Hall was no longer needed. It was sold then to the Luisetti family, who ran it as a boarding house and wedding and function facility, under the name of Antonio Hall. It was sold again, in 1993, to Wellstar Co. Ltd, which claimed to have development plans for the site.

By the end of 2021 no development had taken place. Vandalism and fire damage had rendered it unsafe and unsightly. What grandiose dreams lie in the ashes.