The Cathedral of the Blessed Sacrament, Barbadoes St

A brief history of the Cathedral of the Blessed Sacrament, Barbadoes Street

The Catholic Diocese of Christchurch was established by papal brief on 5 May 1887 and John Joseph Grimes SM was appointed bishop to the new See.

Within a few years, Bishop Grimes “had the idea of devoting [his] energies…to the building of a suitable temple for the worship of God”[i].  He received his first donation, from local priest Fr Foley, for “the noble work”[ii] of a Cathedral Fund.   And later, following an Ad Limina visit to Rome, +Grimes credits Pope Leo XIII as “the prime mover in forwarding the work of the cathedral”.    Encouraged by the Pope’s support, Bishop Grimes sought donations wherever he went in Europe and America. On his return to Christchurch he had raised £3,000 in total.

Although initially favoring a Gothic style building, to rival the Anglican Cathedral, Bishop Grimes was persuaded by architect Francis Petre to give up the gothic design in favour of a basilica.  Francis Petre, was contracted to design the Cathedral.  He had previous experience in using concrete, and this allowed him to utilize innovative methods during construction such as pouring walls of concrete, then sheathed with stone.

The Cathedral was built by Jamieson and Sons who had built other ecclesiastical and municipal buildings through New Zealand. 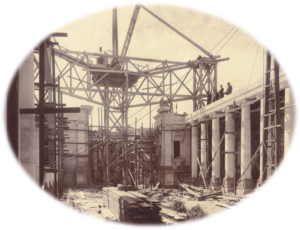 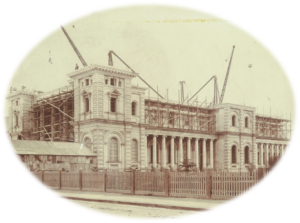 Their skill and innovation was partly responsible for the relatively short construction timeframe for the Cathedral.  Fifty men were employed on the site, and in excess of 3,400 cubic metres of stone, 110m³ of concrete, and 90 tons of steel were used in the construction.

Many issues arose while the Cathedral was being built, including the structure’s subsidence in the soft ground, increasing costs especially in the supply of suitable limestone from Oamaru,  and the prices of zinc and steel for coatings. With subscriptions and donations struggling to offset the increased costs, the Cathedral building was nearly abandoned in 1903.  New Zealand Premier, Richard John Seddon, promoted a bill through Parliament that allowed the diocese to raise a loan for £20,000, thus securing the funds to finish construction. 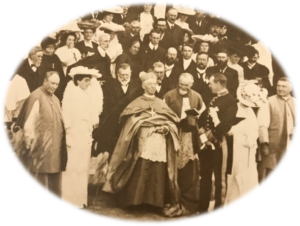 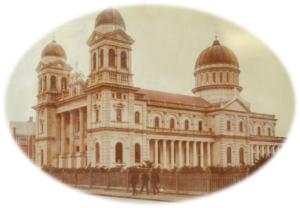 Subsequent decades of neglect resulted in a major project to restore the Cathedral and reorder the interior, which took place in the 1960s/70s. Earthquake strengthening work was completed in 2004.

The 7.1 earthquake on 4 September 2010, resulted in damage and the closure of the Cathedral to the public, to allow for further strengthening and repair.  The earthquake on 22 February 2011, however, caused significant damage to the building. The two bell towers at the front of the building collapsed, bringing much of the front facade down with them. Risk to neighboring properties subsequently resulted in the dome being removed. 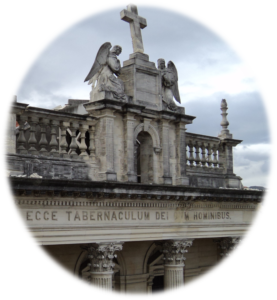 Interior views of the Cathedral of the Blessed Sacrament

Click here for 360o  views of the interior of the Cathedral of the Blessed Sacrament.

Olivia Webb’s Voices Project is a community focused sound project that took place at three earthquake ruined churches in Christchurch, New Zealand. The project involved three neighbourhoods that had been considerably affected by the initial earthquakes of 2010/11 and by years of significant aftershocks: central Christchurch and the ruined Catholic Basilica, Lyttelton and their destroyed Holy Trinity church, and Mairehau with their demolished church of Our Lady of Fatima.

Read more about the 2014 installation here.

Watch the documentary about creating the installation Voices Project – the backstory

Acknowledgement:  Thank you to artist Olivia Webb for giving us permission to share her art.